Jordan’s New Opposition and the Traps of Identity and Ambiguity 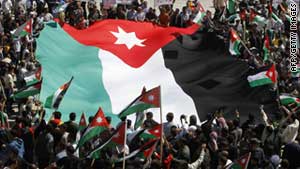 Protesters took the streets of Amman, Jordan, on April 15, calling for governmental and constitutional reforms.

Protesters took the streets of Amman, Jordan, on Friday, calling for governmental and constitutional reforms.There are two major tribulations in Jordan from which all other issues stem.

The first is the autocratic authority that dominates the role of all “state institutions” (i.e., the Cabinet, the Parliament, and the Judiciary). This autocratic domination is legally sanctioned by the Jordanian constitution:

·      Article 26 states that “The Executive Power shall be vested in the King, who shall exercise his powers through his Ministers.”

·      Article 36 states that “The King appoints members of the Senate and appoints the Speaker from amongst them and accepts their resignation.”

·      Article 98 states that the “Judges of the Civil and Sharia Courts shall be appointed and dismissed by a Royal Decree.”

In addition to all those powers vested in the king by the constitution, Article 30 of the constitution further states that “The King is the Head of the State and is immune from any liability and responsibility,” while Article 195 of the Penal Code criminalizes any criticism of the king making it by punishable by a prison sentence of one to three years.

This autocratic authority is the source of corruption, the elimination of civil liberties, the dominance of the security apparatus over society, and the lack of respect for citizens’ dignity. It has overseen the privatization of public institutions and the withdrawal of state-provided social safety nets as the state became midwife to a political comprador class whose narrow interests government policy caters to.

The second tribulation is the set of state-sponsored identity divisions: a “Jordanian” identity on one side, and a “Palestinian” identity on the other. The former divides into an unlimited number of regional (north, south, center), clan, and family identities. These divisions facilitate the manipulation of the social whole, diverting it from the main struggle for liberation towards smaller internal struggles over the benefits and privileges offered by the political authority. As these smaller conflicts erupt, the political authority positions itself as both mediator for all and guarantor for each of the struggling fragments.

Despite the extreme clarity of these tribulations, opposition forces–especially the newly-emerging “alternative opposition”–decides to look away from them and leave them unaddressed for many reasons.

One reason for this is the need to form the widest coalition possible, which is achieved by formulating vague, ambiguous, and subsidiary demands effectively making them unrealizable since their condition of possibility remains untouched. In addition, such demands are prone to opportunistic interpretation and use by each group within the coalition, each according to its own priorities, agenda and relations.

A related reason opposition forces are silent on the core tribulations is the presence of isolationist groups within the opposition’s coalition that call for the withdrawal of citizenship from Jordanian citizens of Palestinian origin as well as the complete disengagement of Jordan from the West Bank. Those groups proclaim that “there will be no solution before solving the problem of Palestinians in Jordan,” reframing the right-of-return as an internal existential struggle rather than being a core issue for struggling against “Israel.” These isolationist groups conceive of a “Palestinian comprador” class and blame it for corruption and the selling-off of the public sector. The isolationist groups within the opposition coalition block any movement away from the “Jordanian” and “Palestinian” identities and towards the formation of a third collective trans-state identity, one that unifies the people in a liberationist project.

Another reasons is that certain “leaders” of this opposition are clearly connected with currents and personalities within the political authority, most notably the “old guard” who lost their position with the ascendance of King Abdullah II. This old guard has recently been empowered by the wave of protests that are sweeping the country. One such leader openly met with the former head of the General Intelligence Department, Muhammad al-Thahabi, while the latter was in office and described him in newspaper articles as a “national leader.” Other “leaders” welcomed the appointment of the current PM Ma’rouf al-Bakhit and met with him, while one of them is heavily connected with Taher al-Masri, a former PM and the current head of both the Senate and the regime-sponsored National Dialogue Committee. This connection enables those “leaders” to negotiate with the political authority and attain personal or closed-circle benefits outside the interests of the general public that is yet to formulate a broad-based political project.

The fourth reason is the near-suicidal attempt of these opposition coalitions to prove their Jordanian authenticity vis-à-vis their identity by the strict adherence to wearing red kuffiyyas (not white/black ones that symbolize Palestine), adopting a beduin dialect, propagandizing the support of clans (a mechanism also used by the political authority with no means to substantiate both claims), playing the songs of Omar al-Abdallat that celebrate regional divisions, airing the royal anthem, cheering “Long Live the King”, and almost-exclusively presenting speakers of eastern-Jordanian origin. All this did not happen in a pro-regime rally, but rather in the March 24 Youth Movement’s sit-in at the Jamal Abdel-Nasser Square in Amman on March 24-25, 2011. The sit-in was dispersed by extreme violence, resulting in the death of 57-year-old Kahiri Sa’ad and the injury of hundreds. All the insistence on the “Jordanian identity” by these demonstrators did not protect them and they were labeled–despite all their efforts—Palestinians. The counter-mobilization was based on this very premise. The demonstrators failed to comprehend that a “Jordanian identity” implies absolute loyalty to the regime, and that the political authority, its thugs, and the social sectors it mobilizes views any member of the opposition as “Palestinian” even if his great-great-great-grandfather was born on the East Bank (i.e., contemporary Jordan). An illuminating example of this was the demand by MP Muhammad al-Kuuz—who is of a Palestinian origin—for the protesters—many of whom were Jordanians of East Bank origin—to be expelled to Palestine via the Shaykh Hussein Bridge. From the vantage point of the political authority, the “Jordanian” is the loyalist and the “Palestinian” is the opposition, whatever the details are (i.e., royalist, reformist, revolutionary).

What happened on March 24-25, 2011 in Jamal Abdel-Nasser Square in Amman should serve as an alarm bell for the opposition in Jordan, especially the youth groups operating on the grassroots level who consider their movement independent of any top-down influence or alternatively overestimate their ability to neutralize such influence. The alarm is concerned with the opposition being trapped in the above-mentioned constraints resulting in its political paralysis.

An exit from this dilemma exists in the following points:

1) Eliminating the ambiguity in the political demands of the opposition by further articulating and then consolidating them into one: a new constitution that returns the authority back to the people and protects civil liberties. All other demands regarding corruption, poverty, and so on can spring from this main demand.

2) The current “leaders” of the opposition should step aside and stop their opportunistic drive which was paid for dearly by the people in 1989, when the uprising in the south was co-opted by the National Charter Committee and a “political reform” process transformed the then-banned and vibrant political parties into docile inactive structures effectively killed democracy under the banner of democracy. Now, in place of the National Charter Committee we have a National Dialogue Committee. The former committee worked on laws regarding elections and political parties, and the latter committee is working on those very same laws! History is repeating itself, but with a new set of opposition leaders. Those “leaders” are free to fight for their own place in the system, but not on the backs of the demonstrators.

3) Projecting a broad-based alternative to the identity divisions. Neither the “Jordanian” nor the “Palestinian” identities can be productively utilized. A sectarian or a racist identity cannot be utilized to eliminate an opposing identity of the same caliber. The identity portfolio managed by the political authority in Jordan in collaboration with the Palestinian factions should be completely discarded. Palestine does not belong to the Palestinians, it belongs to all those who want it liberated and to those whose interests are accomplished through its liberation. This is evidenced by the historical record, geographic realities, and socioeconomic relations. A “Jordanian national movement” and a “Palestinian national movement” are impossible to separate in Jordan. The movement is one, and it has to struggle in both arenas. Any trend that proposes the contrary seeks to deepen the split, not bridge it.

4) Renouncing isolationist groups and detaching them from the body of the opposition coalition. Confronting the isolationist Jordanian identity with an open and democratic one, as some groups of the new opposition have discussed has proven to be a failure in the Jamal Abdel-Nasser Square demonstrations. The “Jordanian” identity is pre-loaded with the pre-requirement of complete loyalty to the regime. The opposition cannot reclaim and reproduce this identity. An important topic to be mentioned here is “citizenship”. It is understood that citizenship is the legal status of an individual within the state, and the attainment of all political, social and economic rights connected to this legal status. Identity is an individual identification of loyalty, whether it was a class, social, political or religious loyalty. Identity is how an individual defines him or herself. One can be an Arab American or a Muslim French or a working-class Swede. Citizenship should have no connection with identity and the rights designated to a citizen should not be attached to identity and loyalty. Can “citizenship” or the “citizenry” approach be a solution in Jordan? Not at all, since such an approach will be automatically considered “Palestinian,” a reaction to those who demand withdrawing citizenship from Jordanians of a Palestinian origin. Thus the challenge remains of building an identity that transcends the “Jordanian”/”Palestinian” divide.

see also the companion piece by Hisham Bustani, “The Alternative Opposition in Jordan and the Failure to Understand the Lessons of the Tunisian and Egyptian Revolutions”:  http://www.jadaliyya.com/pages/index/959/the-alternative-opposition-in-jordan-and-the-failu