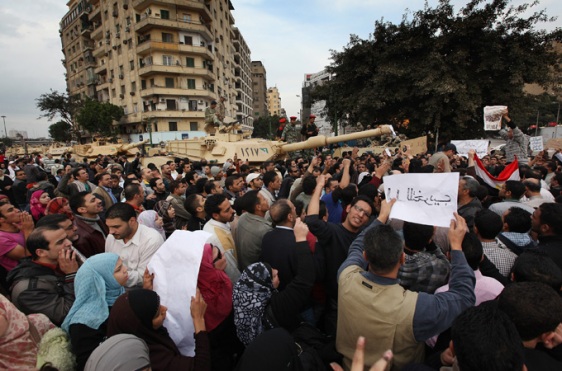 Egyptian protesters have called for a massive demonstration and a rolling general strike on Tuesday in a bid to force out president Hosni Mubarak from power.

Our producer in Egypt reports on the latest developments

The so-called April 6 Movement said it plans to have more than one million people on the streets of the capital Cairo, as anti-government sentiment reaches a fever pitch.

The call came as Mubarak swore in a new cabinet in an attempt to defuse ongoing demonstrations across the country.

But opposition groups say personnel changes will not placate them and have said they will continue until the president steps down.

“The whole regime must come down,” Hassan, a construction worker and protester told the Reuters news agency.

“We do not want anyone from Mubarak’s retinue in the new government, which the people will choose. We want a civil government run by the people themselves.”

Tens of thousands of people are continuing to demonstrate in Cairo’s Tahrir square after hundreds remained camped out overnight, defying a curfew that has been extended by the army.

There is a heavy army presence around the area, with tanks positioned near the square and officers checking identity papers.

One of Al Jazeera’s correspondents said military attempts to block access to the square on Monday by closing roads was not working as more people were arriving in a steady stream.

“Protesters say they’ll stay in this square for as long as Mubarak stays in power,” she said.

Protesters seem unfazed by Mubarak’s pledge to institute economic and political reforms. Our correspondent said people feel that such pledges “are too little, too late”.

Al Jazeera reporters in Cairo also said police had been seen returning to the streets, directing traffic, after being absent since Friday.

“We are waiting for the minister of interior to announce in what form they are going to come back onto the streets and why they disappeared after Friday prayers, on the ‘second day of rage’,” one correspondent said.

“The absence of police has given looters a free rein, forcing ordinary citizens to set up neighbourhood patrols. Many people are wondering where the police disappeared to.

“There are two schools of thought as far as the police are concerned: One is that many of them decided to join the protesters.

“The other is that the regime was saying to the people, ‘You want to protest. We’ll pull back the police and you feel what anarchy feels like’,” our correspondent said.

After deadly clashes in which around 125 people were killed in Cairo and other cities, protesters complained that police were using excessive force.

But an Al Jazeera correspondent said some locals greeted police as “long-lost friends” on Monday.

“It’s almost as if the population of Cairo is suffering from selective amnesia … We saw one small boy carrying a tray a of tea to a group of policemen. Another man got out of his car, kissed and hugged the policemen.”

Meanwhile, many people are reported to be panic buying in Cairo amid the unrest.

“I walked into a supermarket and saw complete mayhem,” an Al Jazeera correspondent said.

“People are stocking up on supplies as much as they can. There are very few rations available in the stores. They are running out of basic supplies, like eggs, cheese and meat. Deliveries have not been coming for days.”

The former head of the International Atomic Energy Agency told the crowd on Sunday night that “what we have begun cannot go back” referring to days of anti-government protests.

The National Coalition for Change, which groups several opposition movements including the Muslim Brotherhood, wants ElBaradei to negotiate with the Mubarak government.

As the protests continue, security is said to be deteriorating and reports have emerged of several prisons across the country being attacked and of fresh protests being staged in cities like Alexandria and Suez.

Thirty-four leaders from the Muslim Brotherhood were freed from the Wadi Natroun jail after guards abandoned their posts.

Chaos has also been reported at Cairo’s international airport, where thousands of foreigners are attempting to be evacuated by their home countries.