Sent to Frontlines by Women against Sexual Violence and State Repression (WSS), Delhi

WOMEN’S GROUPS FROM ALL OVER THE COUNTRY, GIFT THE CBI MORE SHEETS FOR THEIR NEXT COVER-UPS!

DEMAND: IMMEDIATE RE-OPENING OF CASE OF DOUBLE RAPE AND MURDER IN SHOPIAN, JUSTICE AGAINST CBI COVER-UP!

13 December 2010 marks one year of the report filed by the CBI [Central Bureau of Investigation] on the double rape and murder of two young women, Asiya and Neelofar in Shopian. A report that blatantly covers-up the crime, acquits responsible officials and indicts those who dared to speak out against the injustice.

Tired of trying to seek justice against through the usual channels, about 100 women and men from women’s groups, students’ groups, and democratic rights groups as well as concerned individuals gathered near the CBI Headquarters in Delhi today to gift the CBI some more bedsheets for their next cover-ups.

Peppered with signatures and messages like GIFT FOR YOUR NEXT COVER-UP!  CBI INVESTIGATE YOURSELF!  JUSTICE FOR ASIYA AND NEELOFAR!  COVER-UP BUREAU OF INVESTIGATION NOT CENTRAL BUREAU OF INVESTIGATION!, each sheet was a reminder that from Delhi to Jammu and Kashmir, Tamil Nadu to Maharashtra, Madhya Pradesh and Chhattisgarh that the voices demanding justice in Shopian are still rising.

Father of Neelofar - Sayed Abdul Hai participates in the Protest

Also in the gathering was the father of Neelofar – Sayed Abdul Hai, her husband – Shakeel Ahmed and her three year old son – Suzain who had come all the way from Shopian to express their anger and frustration with the ‘findings’ of the CBI.

The delegation met with the Director of the CBI, Mr Singh, and gifted him scores of bedsheets with hundreds of endorsements from all over the country demanding a fresh investigation into the case!  The Director, while accepting our sheets, the memorandum, critiques and the report of the Independent Women’s Initiative for Justice, said he would look into the matter but refused to give a timeframe in which he would do so.

The Women against Sexual Violence and State repression (WSS), is committed to following up the case and is demanding a reply from the CBI within a month.

A brief background: On the morning of 30 May, 2009, Asiya Jaan and her sister-in-law Neelofar Jaan were found dead on the banks of Rambiara Nullah in Shopian, Kashmir.

The police did little, refusing to even register the case for five days!  Two postmortems conducted immediately after clearly stated that the women were raped and murdered. Even as Shopian town observed a 45-day long bandh, the people of Kashmir put aside all other political demands to join this agitation and the people of Jammu also lent solidarity.

Justice Jan Commission appointed by the Chief Minister indicted the police. The High Court also stated that the police were either implicated in the crime or were shielding the culprits.

Amidst the failure of the local police and political pronouncements of the Union Home Minister giving a clean chit to the armed forces before the Parliament, the case was handed over to the CBI on September 17, 2009.

But the premier investigative agency in the country, the CBI, built an extra-judicial case and used the media extensively to make all earlier investigations in the case seem motivated or incompetent. Some of the news leaks were simply fantastic – like finding Asiya’s hymen intact four months after she was buried and hence denying the rape of both women! 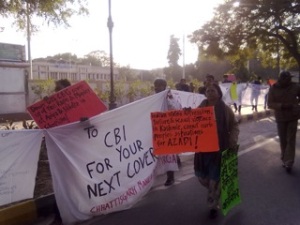 The CBI also concluded that both adult women had died from ‘accidental drowning’ in a nullah that with just six inches of water!  It filed supplementary charge-sheets against the State prosecutors, Government doctors, advocates for the complainant, advocates demanding justice and the family members of the women calling them separatists.

Shockingly, the CBI report also states that since there was no crime, the implicated and suspended policemen were innocent.

The report does not explain how the bodies of the two women were invisible to the search party the whole night and appeared suddenly at dawn, how these young women drowned in a shallow nullah where no deaths have taken place nor explained eyewitness accounts that Neelofar’s body was wet only from one side when she was found.

We have been following this case from the very start. A demonstration demanding justice was held in Delhi in mid- June, 2009 followed by a fact-finding in August, 2009. A press conference on the findings was held prior to the submission of CBI’s final report to the Courts in December, 2009.

In May, 2010, with no justice in sight, we wrote an open letter to the Chief Justice of India, to the National Commission for Women and to the National Human Rights Commission which was endorsed by more than forty organizations from the whole country.

It is clear that the CBI, the country’s leading investigative agency has made a report to suit the political exigencies of the extant governments, whether at State or Union level,  and made a mockery of the due rights guaranteed in the democratic republic of India. Hence the Cover-up Campaign!

Through this action we want the Home Ministry and the CBI to be aware that we continue to DEMAND JUSTICE FOR NEELOFAR AND ASIYA, for all women of Jammu & Kashmir and for all women of India, especially in instances of sexual violence against women are increasing either by, or in collusion with, the forces of the state.

Hence, we are demanding an immediate re-opening of the case, and a commitment that as the premier investigating agency of the country, the CBI, and the government will commit themselves to greater course of justice in cases, especially those of sexual violence.