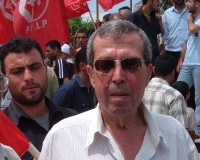 [The Popular Front for the Liberation of Palestine (PFLP) has articulated over many years the demand for a single secular, democratic state in historic Palestine, and the demand for a two-state solution based on a return to 1967 borders, with a Palestinian state in the West Bank and Gaza. These two views continue to be vigorously debated among Palestinians in the occupied West Bank, in Gaza, in presently constituted  Israel and throughout the Palestinian diaspora.  In this interview, which appeared on a blog on the Middle East, Dr. Rabah Mohanna of the PFLP Politburo assesses the current political situation and prospects for the advance of  the Palestinian struggle for national liberation.-Frontlines ed.]

In the Gaza HQ of the Popular Front

“We will transform every grain of sand into a mine under your feet.” Javara (Mohammad El-Aswat), the PFLP military commander of the Gaza Strip who was assassinated in a safe house belonging to Dr Rashad Mosmar, on the back of Es-Shifa hospital in Gaza City, by the Israeli Occupation Forces on a night of October 1973.

Dr Rabah Mohanna, a health doctor, is a prominent figure in Gaza. He is a member of the Politbureau of the Popular Front for the Liberation of Palestine, a leftist group with a glorious past. On his email address are mentioned two numbers: 48, the year of his birth. His first name means winner; the root of his surname means happiness.

Here, Dr Rabah Mohannah gives us an assessment of the situation in Palestine seen from the headquarters of the PFLP in Gaza.  “From 1948 to this day there are in the Gaza Strip some socio-economical and political characteristics proper to the Gazans, but all of them come within the whole Palestinian issue, I mean Palestinians in historical Palestine, Palestinians in the West Bank and Palestinians living in exile.

“Why in Gaza? Because many factors since 1948 have kept the national Palestinian issue alive and have been the basis, the optimal basis, for the real resistance against the Zionist project. The resistance has proven to be strong and effective particularly in Gaza. We have seen that through the activities of the fedayin [freedom fighters] in 1954 during the Egyptian administration, through the activities of the resistance when Israel occupied Gaza in 1956 and after the occupation of June 1967 through the effective and unique resistance till the mid-seventies.

I remind you also that the first Intifada started in Gaza [on 9 December 1987]. But, again, all of that took place within the context of the whole national Palestinian issue because the locals realized that their freedom was not for Gaza only, but was part of the freedom fight of all the Palestinians.

“If you keep this background in mind, I think the present situation in the Gaza Strip will be easier for you to understand. First, the Gazans suffer immensely from the siege, the siege imposed on Gaza mainly by Israel: the ban on the entry of raw construction material, the ban on the movements of people and goods, the ban on the movements of patients, etc. The siege imposed on Gaza has many negative effects on the socio-economic life of the Gazans and there is a lot of parameters indicating how much the locals are affected.

“The aim of this siege is not only to make the life very difficult for the Hamas government – which I remember you has been democratically elected in 2006 – but also because the Israelis realize the importance of Gaza in the context of the Palestinian freedom fight. Linked to that is the Sharon plan implemented in 2005, that is the unilateral disengagement from the Gaza Strip, because Sharon aimed to destroy the Palestinian national project. I mean, one of the ways was to separate Gaza from the West Bank, thus ending any possibility to have a Palestinian state within the 1967 borders.

“Second, the separation between the Gaza Strip and the West Bank represents a real danger. If we don’t pay enough attention to it, it will affect the whole national Palestinian issue. The separation of Gaza from the West Bank may become an eternal division. The Israelis try to change the mentality of the Palestinians in Gaza and in the West Bank by dividing them, so there will be Gaza and there will be the West Bank, two completely distinct entities. Unfortunately, some data show us that this dangerous attempt has already started to affect some people. The PFLP is aware of it and this leads us to the third point.

“With this division between the Gaza Strip and the West Bank, we do realize that any Palestinian movement, either a political movement or a resistance group, will be affected negatively by it. Whoever will be ready one day to negotiate seriously with the Israelis will suffer in the sense that the negotiator will be weak because of the division. Moreover, the resistance as well, I mean the armed resistance, will be weaken because of the separation.

“We continue to insist for having our basic rights and self-determination and the right to return in Palestine. But, unfortunately, Hamas and Fatah are still the main players in Gaza and in the West Bank and it seems they are not enough concerned by the issue of the separation. Because of that we consider that Fatah and Hamas are the cause of the division and will never be able to resolve the problem by themselves. What is necessary is to held a national dialogue among all the political and social groups. Here, we can offer a platform or an agenda for ending the division.

“Here, in Gaza, Hamas still insists on the resistance, but according to their own political agenda, not according to a national consensus. When it comes to the issue of resistance, in my opinion, we should speak with one voice, we should have a common national agenda accepted by all the Palestinian factions and we have to implement it all together. If you go to the Document of the Prisoners released in 2007, it is mentioned on this document the right of all the Palestinians to practice resistance. The document was signed by all the factions.

“The last point I would like to mention is the question of democracy and the human rights issue concerning the Palestinians in Gaza and in the West Bank. I speak about this issue not only from an ethical human rights point of view, but also from the point of view of our national goals and the fact that we are facing a very tough and ferocious enemy and we are facing also those who support the Israelis, like the USA.

For our people, in order to be able to face all these forces and in order to achieve our national goals – I mean the right of return, the right to self-determination, the right to have an independent state within the 1967 borders and the right to resist – I think our people should not be oppressed, either by Hamas or by Fatah. This is very important and here I would like to say a word for our brothers of Hamas.

“When Abu Mazen oppresses the resistance in the West Bank, and also of course Salam Fayyad, both serve their own political agenda, the Abu Mazen-Salam Fayyad agenda. They serve their political goals which are bad for the Palestinian people. On the other hand, Hamas all the time says they have a political agenda and they want to practice resistance. I do agree with the Hamas political agenda, but I cannot understand their behavior when they oppress people in Gaza. When I meet the Hamas leaders, I mention to them these facts. They agree with me, but on the ground what is happening is different.

“In conclusion, I would like to say I’m sure that our goals will be achieved because of the historical experience of oppressed nations, because with time the Zionism will become weaker and because today’s strong capitalist system will fade. On our side we the Palestinians have a just cause which is supported by a plethora of international resolutions.

Thirdly, on our side, we also have the support of the Arab peoples and of the Muslims. Furthermore, a huge number of political and popular movements in Europe and all over the world support our cause, a wide range of popular forces stand with us.

“I’m a doctor in medicine. I studied in Ukraine. I’m a member of the PFLP Politbureau. I was the deputy Chairman of the Doctors’ Union in Gaza from 1981 to 1991. I played an important role in the establishment of many NGOs, in cooperation with [the late] Dr Haydar Abdel Shafi.

“The Israelis jailed me for one year in the Naqab detention center [in the Negev desert] under administrative detention [imprisonment without process]. And Abu Ammar [Yasser Arafat] put me for one month in jail after the killing of Rehavam Zeevi in 2002 [the extremist Israeli Minister of Tourism, called Gandhi, killed in a Jerusalem hotel].

“I was born in 1948 in Gaza. I don’t know my birth date… I haven’t birth certificate… It was summer. It was the time of the Nakba. I’m originally from the village of Masmiyeh. My village was located 45 km from Jerusalem and 45 km from Gaza, at the same distance. Masmiyeh was exactly in the middle. From all of that you can understand many things…”

Flora Nicoletta is an independent French journalist living in Gaza. She is currently working on her fourth book on the Palestinian question.