[This article describes the oppressive conditions faced by Afghan women under the Karzai regime, whose main source of support is fundamentalist warlords who are just as reactionary and anti-woman as the Taliban. This article expresses the common view that Afghan women have made significant strides forward since the US invasion in 1991 in the areas of education, health care and political life. In reality, these advances have been concentrated among more privileged sections of women, and they do not extend beyond Kabul’s city limits. The article also raises the question of what kind of political arrangement could replace US-backed politicians like Karzai and exclude the Taliban after the US/NATO occupation forces withdraw.—Frontlines ed] 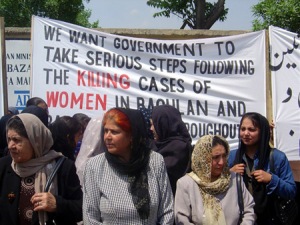 Kabul--Afghan women demand the government take action against the murderers of five women.

UNITED NATIONS (IPS) – Afghanistan will not know peace until women are equal participants in negotiations, stresses a report released  by the University of Notre Dame’s Kroc Institute for International Peace Studies.

“We don’t want the world to see us as victims,” said Afifa Azim, general director of the Afghan Women’s Network, which is working in collaboration with the Kroc Institute. “Afghani women must be at the table if the peace process is to move forward. No women, no peace.”

Co-authored by David Cortright and Sarah Persinger, the report entitled “Afghan Women Speak: Enhancing Security and Human Rights in Afghanistan” was presented as part of the week-long Peace Conference commemorating the 10th anniversary of U.N. Security Council Resolution 1325 on Women, Peace and Security. The report includes some 50 interviews with women leaders, parliamentarians, activists, school principals, NGO and health workers, army officials and police officers in the field in Kabul, Afghanistan, from April to May of 2010.

Since United States-led forces overthrew the Taliban in 2001, critics say Washington has dangled the question of women’s emancipation over the head of the international community, using it to justify prolonged military occupation. Pundits and policy-makers in the West have largely swallowed this argument, taking up the fight for Afghan women with great gusto while continuing to support U.S. and NATO troops in the Middle East.

But such oversimplified arguments pose more of a threat than a salvation to Afghan women, many say.

“The women are aware that their rights are being manipulated for political purposes that have nothing to do with their socio-economic, political privileges,” Cortright, director of policy studies at the Kroc Institute, told IPS. “Women are incredibly suspicious of these attempts to justify militarised policies.”

Presenting his report at the United Nations Church Centre on Thursday, Cortright stressed that in order for the international community to work towards a sustained and equitable peace process, the U.S. and its allies must withdraw from Afghanistan immediately.

“It is clear that the presence of foreign troops is driving the insurgency,” he said. “We have seen that the longer the occupation goes on, the worse the threat to human security, the greater the number of civilian deaths and the stronger the insurgency becomes.”

The only question, according to Cortright, is how to pull out without hampering the meagre gains that the women’s movement has made in the last decade.

Persinger, a research associate at the Kroc Institute, cautioned that any policy change must not undermine the tremendous strides that have been taken towards women’s emancipation in Afghanistan since the penetration of Western troops.

Several of her interviewees expressed strong opinions about improvements in education, access to healthcare and economic and political participation of women after the Taliban lost some ground.

What this recent report makes clear, however, is that for most women in Afghanistan, the ongoing war is akin to being caught between the devil and the deep blue sea. The authors state that it will be “impossible for women and girls to consolidate their power in a militarised environment”.

The report goes on to note that “the climate of impunity and insecurity has produced new forms of powerlessness for Afghan women and girls… who have been widowed, displaced, trafficked and forced into marriage as a result of the conflict.”

Because of honour codes about women enshrined in Sharia law, the violence and turbulence in Kabul following the U.S. invasion has led to the cloistering of female family members, a practice that is severely detrimental to women’s freedom of movement.

Many are not allowed to leave their homes, even to go to school. Since the Taliban has largely resorted to attacks on the civilian population in response to foreign military presence, schools and medical facilities have taken a severe beating. According to the report, virtually every school in the Khost province has been destroyed.

While historically women’s turnout in elections has been as high as 45 percent, the 2009 election, which took place under the auspices of various foreign observers, saw a paltry 20 percent turnout.

Thus what is particularly worrying about backdoor peace talks involving the Taliban is that women’s voices will not be heard.

“Peace does not mean the absence of guns,” Aziz told IPS. “Peace must happen in all spheres of social, domestic life. And this means equal representation for women in the peace talks.”

One of the recommendations the report puts forward is the establishment of a Muslim-led interim government, to oversee the withdrawal of Western troops while simultaneously working closely with women to ensure an equitable transition to peace. “The problem is not Sharia law,” Aziz noted, “but the Talibanisation of Sharia law.”

Cortright suggested that the Organisation of the Islamic Conference could play a crucial role during this period. The report also stressed that a decrease in troops must be met with an increase in aid commitments for education and health care.

In the meantime, many women remain sceptical and fearful about the future.

One Afghan woman, speaking on condition of anonymity, said that Sharia law makes it almost impossible to even conceive of fundamental freedoms such as reproductive, educational and social rights.

“How can we hope to be represented at peace talks when we are not even allowed to be treated in a hospital? It will not happen,” she told IPS.

Regardless of differing opinions, it seems to be universally acknowledged that the success of resolution 1325 depends on how it responds to the needs of the women in Afghanistan.

Azim appealed to the U.N. to take seriously the precarious nature of the situation.

“Without the support of the entire international community, women will not see peace in Afghanistan,” she told IPS.