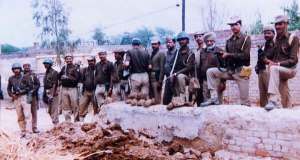 Some of 200,000 paramilitary forces mobilized by the Indian government to attack the adivasis

By Campaign against War on People

The following document is a compilation of information gathered through news reports in the mainstream media, government reports, and reports of independent fact-finding teams. It aims to offer as objective and non-partisan a view of the situation in the affected states, as is possible.

The Status of the Current Offensive

• “If left-wing extremism continues to flourish in parts of our country which have tremendous natural resources of minerals, it will affect the climate for investment.” [PM to Parliament, 9 June 2009]

Padel say that the financial value of the bauxite deposits of Orissa alone is 2.27 trillion dollars. (More than twice India’s Gross Domestic Product). That was at 2004 prices. At today’s prices it would be about 4 trillion dollars…. That’s just the story of the bauxite in Orissa. Expand the four trillion dollars to include the value of the millions of tonnes of high-quality iron ore in Chhattisgarh and Jharkhand and the 28 other precious mineral resources, including uranium, limestone, dolomite, coal, tin, granite, marble, copper, diamond, gold, quartzite, corundum, beryl, alexandrite, silica, fluorite and garnet. Add to that the power plants, the dams, the highways, the steel and cement factories, the aluminium smelters, and all the other infrastructure projects that are part of the hundreds of MoUs (more than 90 in Jharkhand alone) that have been signed. That gives us a rough outline of the scale of the operation and the desperation of the stakeholders.’ (Outlook, 9 November 2009)

Excerpts from the Report of the Expert Group on “Development Issues to Deal with Causes of Discontent, Unrest and Extremism”

For 30 years in places like Chhattisgarh, there have been Naxals. Why is the situation now being made to sound like there is this huge upsurge? The real fact is…that it is the Government that wants a war to clear out the forest areas because there is a huge backlog of MoUs in Jharkhand as well as Chhattisgarh that are not being activated. (Arundhati Roy, interview with CNN-IBN, October 21, 2009)