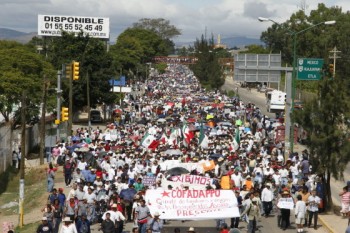 Two unidentified men shot and killed Catarino Torres Pereda, general secretary of the Citizen Defense Committee (Codeci), at the indigenous rights group’s office in Tuxtepec in the southern Mexican state of Oaxaca on the afternoon of Oct. 22. The murderers escaped in a car waiting for them nearby.

In the evening members of Codeci and other organizations protested the assassination with a demonstration at the Alameda de León plaza in the city of Oaxaca, the state capital.

Codeci was part of the protest movement against Oaxaca governor Ulises Ruiz Ortiz that shut down much of the state for five months in 2006, and Torres was one of the first activists to be detained in the wave of repression Ruiz Ortiz used to fight the movement. Federal and state police arrested Torres on Aug. 6, 2006, and he was held in the Almoloya de Juárez federal prison until his release on bail on Mar. 8, 2007.

In Oct. 23, one day after the Torres murder, Heriberto Pazos Ortiz, the director and founder of the Unification Movement of the Triqui Struggle (MULT), was killed while riding in Oaxaca city. Two men on a motorcycle approached Pazos’ vehicle and shot him through a window, using silencers on their weapons. Pazos had two state police agents and a personal bodyguard with him for protection, although the authorities didn’t explain what sort of threats he was facing. Members of MULT and the indigenous Popular Unity Party (PUP) protested the killing by blocking the Cristóbal Colón and Ciudad Alemán-Puerto Ángel highways.

Founded in 1981 to struggle for the rights of the indigenous Triqui, in recent years MULT has been engaged in fights with a rival group, the Independent Unification Movement of the Triqui Struggle (MULTI), leading to a number of deaths in the autonomous municipality of San Juan Copala; the Social Welfare Unity of the Triqui Region (UBISORT), a paramilitary group linked to the PRI, has also been involved.

Despite the history of violence among the Triqui groups, observers on the left tended to suspect that Pazos’ murder involved forces in the PRI, which will be out of power in Oaxaca for the first time in decades when Ruiz Ortiz ends his six-year term on Nov. 30. The assassination was a “crime of state,” said Flavio Sosa Villavicencio, a state legislative deputy for the small leftist Workers Party (PT) and a leader of the Popular Assembly of the Peoples of Oaxaca (APPO), which spearheaded the protests in 2006.

The Cerezo Mexico Committee Human Rights Organization, a group that formed around the imprisonment of three brothers in 2001, called the killing part of a government “[s]trategy that was designed as a form of containing, dividing and annihilating the social movement.” The use of what appeared to be professional killers with silencers on a motorcycle–the “same modus operandi as that of the Colombian paramilitaries”–“shows us an advance in the degree of sophistication in paramilitary activity in México,” the group wrote on Oct. 23. (LJ 10/24/10; Prensa Latina 10/24/10; Organización de Derechos Humanos “Comité Cerezo México” bulletin 10/23/10)