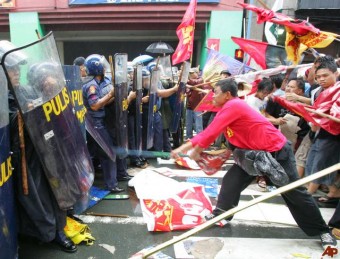 “Victims of human rights violations have publicly denounced widepread and extended military operations since August in Jiabong, Motiong, San Jorge, Catbalogan, Gandara, Paranas, San Jose de Buan and Matuguinao in Western Samar, as well as several adjacent towns in Northern and Eastern Samar. This goes to show the Aquino government is enamored with the militarist solution and Gen. Mario Chan is implementing this by militarizing Samar.

It is already clear the present government is dragging its feet in the peace process with the NDFP, extending the widely condemned Oplan Bantay Laya until January 2011, and carrying out the US Counterinsurgency Guide in plotting its own counterrevolutionary war.” 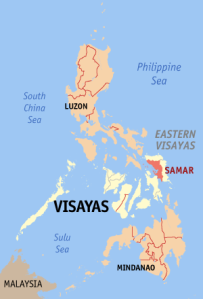 The NDF-EV spokesperson also assailed Gen. Chan for maliciously accusing the revolutionary movement of being against development in opposing the US-funded Samar Road project. “Without basic socio-economic reforms, the MCC project will be a mere publicity and psywar gimmick to glamorize the Aquino government and to justify militarization in the name of securing this project. To assure genuine economic development, land reform and national industrialization are needed.

But Samar reflects the backwardness and imbalance under semifeudalism in Eastern Visayas. Of the agricultural land there, the crops planted do not benefit the people: over 60% goes to commercial crops for export such as coconut and abaca, while less than 20% is left for rice and other basic foodstuffs.

“The agricultural conditions are also dire: the number of irrigated rice fields is drastically declining, farmlands continue to be divided into smaller and less productive parcels, and the use of agricultural machinery or even farm animals is woefully inadequate. Such is the explosive situation where the peasants are becoming increasingly landless, desperate and hungry. Meanwhile, other economic activities such as mining and logging have not resulted in industrialization but the plunder of the island’s rich natural resources as raw materials for export. Thus it is Gen. Chan who is against development, for pushing a project that will not solve the island’s economic ills, but will hasten the exploitation and oppression of the people.”

Fr. Salas likewise charged Gen. Chan of hustling for the US-funded project in his greed to ensure his share from the bureaucratic loot. “The NDF-EV is aware civilian contractors in Samar have been complaining in recent years they are being muscled out by the 8th ID in construction projects. High-ranking military officials not only back certain contractors to share the kickbacks, but also use the army engineering battalions to grab corruption-tainted projects that should have been done by the civilian government. Isn’t it strange otherwise why Gen. Mario Chan makes vulgar demands to the local government to rush the US-funded project, when he is out of line in doing so, as a military official who should be subordinate to civilian authority?”

The NDF-EV spokesperson called on the people to express their grievances and expose the real situation in opposing the US Millenium Challenge Corporation project. “We call on the peasantry and the people to press the demands for land reform and national industrialization against a grandiloquent but deceptive project. We call on the Church and the human rights and peace activists to expose and oppose the “counterinsurgency” scheme behind the MCC project based on the US COIN Guide. We also call on the anti-corruption activists to study and criticize the US-funded project that will surely be undertaken by the same thieves responsible for the neglected state of Samar’s roads and other public works. Let us oppose the US imperialist design against our national sovereignty in the MCC project and the related US COIN Guide. Let us fight for basic socio-economic reforms that should be undertaken for genuine development. Let us fight for a just and lasting peace against the militarist and fascist direction charted by US imperialism and its puppet Aquino regime.”