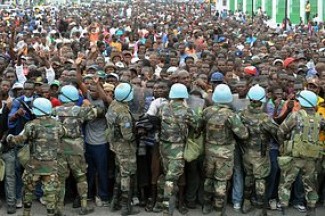 On Oct. 15 about 60 Haitians protested an extension of the mandate for the United Nations Stabilization Mission in Haiti (MINUSTAH) by blocking the entrance to the mission’s main logistics base near the Port-au-Prince airport. The Associated Press wire service reported that the protesters, many of them people left homeless by a major earthquake on Jan. 12, spray-painted slogans on cars and burned the Brazilian flag; Brazilian troops lead the joint military-police mission, which has occupied Haiti since June 2004.

MINUSTAH security forces reacted violently to the protest, with a plainclothes guard striking a protester and a Jordanian soldier firing a warning shot. AP journalists said a Haitian police agent hit protesters with his rifle and a UN vehicle “push[ed] through the crowd, knocking over protesters and journalists.”

Opposition to renewing the mandate is widespread among grassroots organizations, and protests against the UN occupation have been on the rise since the death of 16-year-old Gérald Jean Gilles at a MINUSTAH camp in Cap-Haïtien on Aug. 17. At an Oct. 15 press conference, economist Camille Chalmers, executive secretary of the nonprofit Haitian Platform Advocating an Alternative Development (PAPDA), denounced the mission as part of a “new offensive by American imperialism.” He cited a history of abuse, including a major case of sexual abuse that led to the removal of more than 100 Sri Lankan soldiers, and noted that MINUSTAH cost a total of $5 billion from 2004 to 2009. “[R]ather than serving to reinforce the institutional capabilities of the Haitian state, [these resources] have been squandered in the operational expenses of the UN mission,” Chalmers said. (AlterPresse 10/15/10)

On Oct. 14 the Haitian delegation to the third World March of Womenconference, held in Bukavu in the Democratic Republic of the Congo, told the 1,000 representatives from 42 countries that “Haitian women are fighting against the presence of MINUSTAH in our country.” (AlterPresse 10/16/10)

In other news, teachers’ unions, the labor group Batay Ouvriye (“Workers Struggle”), Solidarity With Haitian Women (SOFA) and the Platform of Haitian Human Rights Organizations (POHDH) called for a demonstration on Oct. 15 to protest the killing of teacher Louis Jean Filbert, who was wounded on Oct. 8 during a rally for universal education; he died the next day. (Contrary to earlier reports, he was apparently hit by a tear-gas grenade, not a police bullet.) The police agent Francine Desruisseaux is suspected of causing Filbert’s death. As of Oct. 12 she was reportedly being sought by the authorities. (Radio Kiskeya 10/12/10; Agence Haïtienne de Presse (Haiti) 10/13/10; AlterPresse 10/14/10)