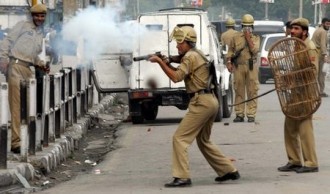 Indian troops at work in Kashmir

Pallhalan, Oct 17: With an end to the 35-day siege in the form of curfews, Pallhalan village of Bandipora district of North Kashmir finally woke up Sunday to a comparatively freer atmosphere and  residents quickly went about their normal chores.

However, as one descends into this hamlet of over 60,000 population through a diversion from the Srinagar-Baramulla highway,  graffiti and slogans on the walls point to the intensity of confrontation between the government forces and locals during the past over four months of unrest in Kashmir.

One of the most volatile areas of unrest, Pallhalan registered several deaths to the Kashmir unrest. The ‘war of words’ in the form of painted sloganeering on the walls and shop-shutters has both the sides: youth writing ‘pro-freedom’ and ‘anti-India’ slogans and next to these artistically scribbled ‘we want India’ by the uniformed men.

The walls and shop-shutters are galore with this ‘written’ confrontation, besides the more injuring stone-pelting and the fatal bullets. Someone wrote ‘I am Indian’, but countered by an ‘I am Geelani man’. At the same time, ‘I love my Pallhalan’ has been erased and replaced with ‘I love my India’ or ‘Jai Hind’, and so on.

This correspondent was a new face to them in a 35-day closed fortress. “It has been a long time we saw someone openly coming down to this village from the main road. Receiving guests are a forgotten thing for us. But, thank God, the siege was finally lifted,” says Ghualm Mohiuddin, a local. However, he is quick to add, “Don’t (authorities) again impose curfew.”

But once in the village interiors, every soul seems to be wounded and recalling horror of the past four months of unrest. For instance, this villager in his late sixties, sitting outside his shabby house, narrates the horrendous tale of alleged harassment by the paramilitary CRPF.

“One month back I was at home with my two young sons. All of a sudden I witnessed some commotion, followed by heavy teargas shelling and aerial firing. In the meantime, some troops barged into our house and started searching. My elder son (18) hid himself in the bathroom but the younger one (14) preferred to sit with me. The troopers picked him from my side and began thrashing him. They did not even tell me the reason for their unwarranted action. He suffered a fracture in the arm. When it was my turn, an Army official however came to my rescue and asked them not to hit me,” the elderly villager, pleading anonymity, recalls. The injured boy did not stay in the village after the thrashing and soon fled to his maternal uncle’s house out of fear.

Next door stays another boy who is bed-ridden. Amir Ahmad (16) received a bullet in his leg on Shab-e-Qadr, the day four people fell to the firing by forces. Amir was off to the mosque for prayers when he met this fate. Worse, he was disheartened when he came to know that his cousin had succumbed to his injuries the same day in forces’ firing. Amir has no sensation in the right leg and doctor’s reports suggest that his injury has little chances of recovery.

The family of six survives on the meagre earnings of Amir’s old father Ghulam Ahmad, a carpet weaver and Amir was the lone hope for the future.

Across the lane is another wounded family. Nayeem Ahmad (22), the victim of same day’s troops’ action, who runs a grocery shop at Main Chowk, received two bullets in abdomen and arm.

“There were protests on the road followed by stone pelting and clashes. The troops resorted to firing and everybody ran for his life. But I got two bullets in abdomen and arm. The troops did not allow ambulance to SDH Pattan which is only three kilometers away. Later I was taken to Sumbal SDH, around 13 kms away. Thank God, I survived although I had heavy blood loss,” Nayeem recalls.

However, his brother, Ansarul-Haq was not so lucky. Pursuing his PG in English from Kashmir University, he met the inevitable after a week of coming out of Aetkaf during holy Ramdan. Nayeem said on September 18, Ansarul Haq was in mosque to offer Zuhar prayers when troops allegedly fired upon the people. According to him he received bullet in the head and died on the spot.

Locals say since last two months over two hundred youth have fled the village to evade their arrest.

Deputy Inspector General Police, North Range, Muneer Ahmad Khan said that all those wanted will be arrested and the deployment of troops in Main Chowk is to avoid blockade of Baramulla-Srinagar highway by protesters.

“All those who disturbed public order and indulged in stone-pelting are wanted and will be arrested. The deployment on highway is to prevent the closure of road by protesters,” Khan said.