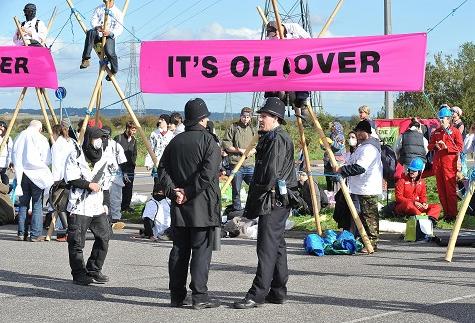 12 climate activists have blocked the sole access road to Coryton oil refinery in Essex, the UK’s busiest oil depot and the largest supplier of oil to London.

The all woman group, affiliated to the Crude Awakening group, are locked to immobilized vehicles on both lanes of the road, preventing oil tankers from leaving the refinery to deliver oil to London.

Coryton refinery is 30 miles north east of London, near Stanford-le-Hope in Essex[1]. In a coordinated move, around 500 protestors from the Crude Awakening event in London boarded trains bound for Stanford-le-Hope, a short walk away from the refinery. Previously announced plans to target central London oil businesses were revealed to be a bid to outfox the police, with Coryton having been the ultimate destination all along.

Terri Orchard, who is taking part, said: “We don’t have a hope of tackling climate change if we don’t find a way to start moving beyond oil. But Big Oil is relentless. From the Gulf of
Mexico to the Arctic to the Canadian tar sands, oil companies are devastating local environments, trampling the rights of local communities, and pushing us over the edge to catastrophic climate change.  We are here at the source of the problem, at the UK’s busiest oil refinery, to stop the flow of oil to London. We’re here to put a spanner in the works of the relentless flow of oil and to say no more. This place, this whole industry, must become a thing of the past.”

This action is taking part of the global week of action called for by the Climate Justice Action Network (CJA). From the Philippines to Argentina, people from 22 different countries are this week taking action against the fossil fuel industry.

Coryton is owned by Petroplus and has a refining capacity of 10 million
tonnes per year. It is the UK’s busiest oil refinery and supplies oil to
petrol stations, airports and factories throughout London and the
southeast. It is used by BP, Shell and all of the oil majors.