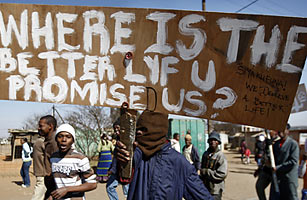 A jobless protester holds a placard during a 2009 march in the Ramaphosa squatter settlement, east of Johannesburg

[Last year, TIME magazine reported, “South African President Jacob Zuma has a problem: the very underclass that swept him into office last April on his promise to deliver them a better life have run out of patience, and they’re venting their outrage on the streets.”  The conditions have worsened, and the anger continues to grow, as shown in this call to action.-ed.]

On the 8th of September 2010 the UPM in Durban sent a letter of demands to Jacob Zuma. His office acknowledge reciept of that letter (which is pasted in below this email) but he has never given us the courtesy of a response to our demands. Therefore we have no choice but to take our desperation and anger to the streets. We will be marching in Durban on 14 October 2010 in support of the demands in this letter.

In addition to these demands we also demanding an end to the attacks on democracy from the ANC.

We reject the media tribunal and the information bill. These are quite clearly nothing other than attempts by the predator state to protect itself from public scrutiny. We are very aware of the class biases in the media. Our own movement has been written about as if it were criminal and as if our most basic and legitimate demand – for enough food to eat -is a threat to society when clearly anyone in their right mind can see that it is poverty and hunger that are a threat to society. But censorship is never the answer. The answer to the elite bias in our media is to further democratise the media by breaking up the monopolies and supporting independent community media.

We also reject the ongoing repression of the movements and organisations of the working class around the country. We stand with our comrades in Hangberg, in Harrismith and in the Landless People’s Movement and Abahlali baseMjondolo as they confront the direct or indirect violence of the predator state. We ourselves have suffered repression. Nozipho Mnetshana was kept under house arrest after the UPM occupied the supermarkets in Durban on 22 July 2009 to eat bread without paying in protest at food prices. Ayanda Kota was assaulted in a police van outside parliament in Cape Town at the opening of parliament this year. Right now Ayanda Kota is receiving threats from the ANC in Grahamstown. After the recent experiences of the Landless People’s Movement in Johannesburg and Abahlali baseMjondolo in Durban we take these threats very seriously.

We call on progressive organisations to unite in a militant and uncompromising rejection of the attacks on the media and on the independent organisations of the working class. A line has been drawn and it is the responsibility of all progressive individuals and movements to take a clear stand against the attack that the ANC is waging on our democracy. We intend to work with all the independent and progressive formations of the working class to defend and deepen democracy from below.

The Unemployed People’s Movement is probably well known to you by now. We are mobilizing the unemployed people of this city so that they can speak for themselves in ensuring that a labour absorbing economy is crafted in this country and that all public authorities, National, Provincial and Municipal, are geared towards building up a model of economic work which is kind to the working people of this land. We want decent work for all.

Mr. President unemployment has reached alarming levels in this country; half of the population is unemployed. Last year alone we lost more than million jobs and our economy continues to shed jobs. We live in permanent poverty. Millions of people have no work, no land and no housing.

It never occurred to us, not even in our wildest dreams, that the ruling party would become such a corrupt and predatory monster that has no regard for the unemployed and the poor. It never occurred to us that the ANC would become the lackeys of the ruling class, the new managers for the ruling class who are hell bent on squandering the resources of our land. The ruling party continues to produce millionaires and billionaires while the unemployed and the poor of this country are being pushed to the peripheries of our society. We are facing extinction in the form of hunger and poverty.

We therefore demand that you:

1.      Take immediate steps to put the Right to Work in the constitution.

2.      Immediately implement a guaranteed income of R2000 per month for all unemployed adults.

3.      Immediately bar all ANC leaders from competing for government tenders including your cronies and girlfriends.

5.      Immediately begin a serious discussion about how to socialize the economy. Socialization of our economy can end unemployment. Socialisation is not the same as Malema’s confusion of nationalization which is just a plan for more elite plunder.

6.      Immediately withdrawal of the Protection of Information Bill

7.      Immediately investigate all party leaders with unexplainable wealth including your son who is a billionaire, your wives and girlfriends and your cronies

Mr. President we stick to our demands and we will continue to organize the unemployed masses around the country and to engage in protest actions until they are met.

One thought on “South Africa: Unemployed People’s Movement to March on Jacob Zuma”