[August 7, the Ivory Coast celebrated the 50th anniversary of its independence from France.  An army parade marked the day, amid speculation that the national elections, now postponed for several years, may soon occur.  What has become of the hopes for independence?  How do they measure against the reality of today?  And what needs to be done?  These are questions being asked, and debated, in the 17 countries of Africa which are celebrating their 50 years of independence in 2010.  This article, published a year ago, discusses the legacy of French colonialism and neo-colonialism in the Ivory Coast.-ed.] 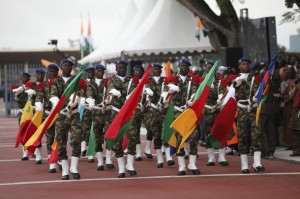 The brutal legacy of European colonialism and neo-colonialism as forms of imperialism manifests itself in various ways in Africa. In the 19th century, French imperialism colonized more African territory than any other of its European counterparts. Many countries colonized by France gained their formal independence in the early 1960s due to heroic anti-colonial national liberation struggles that spread throughout the African continent. Despite the formal declaration of independence for the colonized countries, France among other colonizing European countries, maintains deep economic, military and administrative ties to almost all its former colonies among them Cote D’Ivoire. Like so much of Africa, Cote D’Ivoire is rich in natural resources, especially oil, natural gas, cocoa beans, and coffee. Despite this abundance of resources, the per capita income in 1996 was only $600.

When independence was granted to colonized African states, many were happy because they thought the Colonial masters had packed their package and were gone for good. The euphoria of independence for Cote D’Ivoire, just like most African countries, lasted up to the early 1980s. New imperialists and the former colonial master have made a triumphant comeback in Ivory Coast in the form of neo-colonialism. Until recently, Neo-colonialism has been chiefly associated with political and economic matters. Today, it is also inextricably tangled with so many other things such as conflict resolution and peace-keeping in so many African countries. The comeback of the colonial masters to Ivory Coast, just like any other African country, is keeping the country artificially poor.

Cote d’Ivoire obtained independence from France in 1960 after more than a century of colonization. After Colonialism ended, the social phenomenon of “Neo-Colonialism” began. The country is free from direct foreign rule but the economic infrastructure is still in the hands of the former colonial country’s companies and institutions. The result of this is that, decisions by indigenous Ivorian leaders have to be carefully made so that they remain non-threatening to the institutions that control the natural and financial resources of the country. This results in the following problems which are the general reasons for the lack of integral development and the persistence of poverty in Cote D’Ivoire.

In the first place, Cote D’Ivoire is strained to continue to depend on her colonial master, France, politically. This makes it difficult for the country, if not partially, to contract alliances without asking approval from the colonial master. The continuous dependency on France for political decision is not assisting true democracy to take root in Cote D’Ivoire. France, most at times is found to intercede in Ivorian domestic issues. Recently in response to internal uprisings in Cote D’Ivoire, France did not hesitate to send soldiers into the country. The message is clear: in the third world a nation does not solve its own internal problems but is subject to paternalistic condescension from ex-colonial powers at any moment. This constant intervention undermines the dignity of Ivorian independence and does not allow the country to grow democratically. The etymology of the word democracy is clear and limpid: is about the people and their power. Contrary to the definition of democracy, actions of the neo-colonialist jeopardize the political development of Cote D’Ivoire.

One of the mechanisms that France is using to maintain her presence and institutionalize her neo-colonialist ideas is conflict resolution and peace-keeping by intervening, mostly serving as a mediator, between rebels, tribes and the government of Cote D’Ivoire. According to France, missions in Cote d’Ivoire are simply to protect French nationals -however, this excuse itself has a long history. Throughout the French empires in Africa, the protection of nationals and national interests was the most frequent cause of the assumption of direct imperial control. Mostly French intervention leaves the common Ivorian to face hardships at the expense of protecting French nationals and interest. Although many claim that no empire is to be constructed by French intervention in civil crises, it is not surprising that this makes the people of Cote D’Ivoire and other concern people and organizations wary of a return to French domination.

French partnership with francophone African countries is maintained through the promotion of French language, culture and the spectacularly lopsided external financing and debt rescheduling provided by France. Through this partnership, France has secured a vast market for its products, a steady supply of cheap raw materials, repatriation of the lion’s share of local savings, unrivaled political influence, a strategic presence with military bases occupied free of charge, and the certainty that it can rely on its African allies’ diplomatic support. But for the Africans, the partnership has meant weak trade performance, tight money,

As mentioned before Cote D’Ivoire is rich in natural resources, especially oil, natural gas, cocoa beans, and coffee yet the natural resources of this country are exploited for use in neo-colonialist countries. The means of production are owned by foreign corporations who employ various means to transfer profits out of the country rather than invest them in the local economy. In terms of this, Cote D’Ivoire experiences what is known as ‘development of underdevelopment’. Côte d’Ivoire, with an abundance of cocoa and diamonds, has one of the poorest populations in the world. The economy, which is still really controlled by French imperialism, is based on exporting the wealth at the dictates of the capitalist market and not on using the resources to build up the infrastructure to meet the needs of the people.

In an attempt to control and continue to play a major role in the economic affairs of her colonies, France, just like any European colonial master, indirectly convinced francophone countries in Africa to practice monocultures (dependency on one crop). These monocultures left national economies extremely vulnerable to price swings, making economic planning difficult. Cote D’Ivoire, for years, has been depending on cocoa as her foreign exchange cash crop. The country doesn’t have factories to process or add value the raw-materials (cocoa) produced; hence everything has to be sent to France. With the alarming rate of globalization, competition and trade liberalization, prices of goods have to be dictated by trade organizations which are controlled by the capitalist markets. Cote D’Ivoire’s terms of trade have deteriorated as prices of its most important export product, cocoa, has weakened. Since cocoa is her main export crop, the country faces a depression in the economy which in effect contributes to poverty.

France’s unchallenged political, economic, and military domination of Cote D’Ivoire is rooted in a currency, the CFA franc. Created in 1948 to help France control the destiny of its colonies, fourteen countries, including Cote D’Ivoire, maintained the franc zone even after they gained independence decades ago. In exchange for France guaranteeing the CFA franc’s convertibility, Cote D’Ivoire alongside the other francophone countries agreed to deposit 65% of their foreign exchange reserves in a special account within the French Treasury and granted to France a veto over the franc zone’s monetary policy whenever this special account was overdrawn. These decisions have had devastating consequences on Cote D’Ivoire for more than forty years. The result has been a deadly combination of currency convertibility, skyrocketing interest rates, low inflation, and free capital movement. As though all of these were not bad enough, the CFA franc’s exchange rate, which had remained unchanged since 1948, was devalued by 50% in 1994 by the regional central bank dominated by French and European banks. The problems caused by the devaluation of the CFA franc made Cote D’Ivoire to undergo an alarming increase in poverty.

The depression caused to the Ivorian economy due to the devaluation of the CFA franc and the dependency on monoculture (cocoa), forced the government to get loans from the international Monetary Fund, IMF, and the World Bank, WB, in order to safe the economy and reduce the drastic growing poverty rate in the country. Those who argue that neocolonialism historically supplanted or supplemented colonialism, point to the fact that Africa today pays more money every year (in loan interest payments) to the IMF/WB than it receives in loans from them. This actually is depriving the inhabitants of Cote D’Ivoire, just like any other African country from actual necessities. This dependency that Cote D’Ivoire maintains, allows the IMF/WB to impose Structural Adjustment Plans upon her. Under the auspices of these International Monopolies, lucrative sectors such as energy, telecommunications, water supply, and banks in Cote D’Ivoire were sold off at knockdown prices to western companies under privatization programmes. These adjustments largely result in high interest rates, massive capital flight, and mountains of debt whose repayment prevents higher investment in education, training, health, food production, housing, and industry.

Militarily, France is the key player in Cote D’Ivoire. It maintains a permanent base 10 kilometers from Abidjan (43rd Bataillon d’infanterie de marine) and permits itself recourse to military intervention if Cote D’Ivoire is threatened by a foreign aggressor. Houphouet-Boigny, during his thirty year dictatorship, agreed to maintain the Cote D’Ivoire army in skeletal form. His adage: no army, no coup d’état. He kept the Ivorian army this way by using “Social Control” technique which was practiced by most African leaders of his time. Social control is a technique used by autocrats to enforce laws and rules in order to consolidate their ruling power, promote their legitimacy and to execute their vision for a country. In addition to its personnel stationed in Cote D’Ivoire, France has a forty-seven-thousand-member rapid deployment force (Force d’Action Rapide), which can be quickly airlifted into this country and any other trouble spot in Africa, due to defense agreements with francophone countries. Considering this configuration, France is intrinsically linked to Ivory Coast. Whether one calls this neo-colonialism or not, there exists a substantial economic stake for French business, as well as for the French state. Most of the political unrests that happened in Cote D’Ivoire can be attributed to the military aid received from the neo-colonialist masters. In fact Military aid marks the last stage of neo-colonialism in Cote D’Ivoire. The effect of this is self-destructive. Sooner or later the weapons supplied pass into the hands of the opponents of the neo-colonialist regime and the war itself increases the social misery which originally provoked it.

Increasingly the former colonial power in Cote d’Ivoire appears to have been drawn into the messy crisis, despite its initial mandate only to protect and evacuate French and other expatriates in Cote d’Ivoire. On many occasions French military role changed to ceasefire monitors and sometimes to the extreme. Ivorians and other francophone Africans consider the French Army as a Napoleon Army in Africa.

In conclusion, the economic, political and military interventions of France in the affairs of Cote D’Ivoire, to a great extent are contributing to the increase poverty and the artificially poor development of this country. If Cote D’Ivoire is to grow, it must wisely resist all French neocolonialist ideas and aid of any form, being economic agreements, military or political.