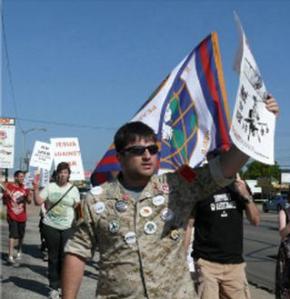 Obama declares Iraq war over, but GIs don’t see it

While Pres. Obama is touting the Iraq war as all but over, thousands of soldiers continue to be sent to patrol Iraq’s streets, where violence is climbing to its highest level in two years. Among those thousands of GIs are a very large number who have previously been deployed, and as a result are suffering psychological trauma.

The rising trend of active-duty military suicides culminated in June with the highest monthly total in U.S. military history. There is no debate over the cause of the suicide epidemic: repeated deployments with severely inadequate treatment in between.

The U.S. military has been exposed for intentionally denying GIs a post-traumatic stress disorder diagnosis to keep the number of deployable troops at a high level. But even those who are diagnosed with PTSD, traumatic brain injury, or military sexual trauma (as a result of sexual harassment or sexual assault during military service) are not exempt from deployment. The Army and Marines are sending wounded troops with recognized psychological trauma from previous deployments on more tours.

Sending traumatized soldiers back to the place they were traumatized to endure another grueling tour, further deepening their wounds, is the type of cruel treatment of GIs that has characterized the handling of the wars by the generals and politicians.

GIs stand up and fight back

One of the units notorious for sending PTSD casualties on deployment after deployment is the 3rd Armored Cavalry Regiment at Fort Hood, Texas. As Obama seeks applause for “ending” the war in Iraq, there are busloads of GIs suffering from PTSD, TBI and MST waiting to ship off to another tour in Iraq this month.

For this deployment, however, Fort Hood soldiers have begun standing up. Soldiers inside the unit are reporting a bleak situation regarding the mental health of many of its troops, and have begun organizing with other veterans and supporters to inspire those troops to exercise their right to refuse to let their lives be thrown away.

On July 30, approximately 30 active-duty soldiers, veterans, military families and supporters held a rally outside the gates of Fort Hood with a large banner directed at Colonel Allen, commander of 3rd ACR, which read “Col. Allen … Do Not Deploy Wounded Soldiers!” Demonstrators also carried placards that read: “Tell the brass: Kiss my ass!” and “They lie, we die!”

The demonstration was at a main entry point for the base, so thousands of active-duty GIs and their families passed by the demonstration. Many also joined. Fort Hood Military Police sent vehicles and troops to intimidate the demonstrators, fearing a growing movement. Soldiers at Fort Hood have held several similar protests in the past, each time bringingin new GIs into the movement.

The protest was organized from Under the Hood café, an anti-war GI coffee house off base. One of the organizers of the protest, Michael Kern, is an active-duty soldier at Fort Hood and a member of March Forward!. After coming home from Iraq with PTSD and TBI, and facing being sent on more deployments, he became active in the anti-war movement.

“We’re not out here protesting our brothers and sisters in 3rd ACR,” he says. “We’re here to stand with them, but to stand with them against the brass. The officers have proven that they don’t care about our lives. We’re out here to tell those soldiers about to deploy that they have the right to resist being used and mistreated.”

This protest coincides with mounting frustration and plummeting morale throughout the U.S. military as a result of repeated deployments to two brutal, colonial-type occupations. GIs everywhere are organizing against the criminal mistreatment of veterans, and against the crime of sending us to die for the oil giants, the military-industrial complex and the banks.

The only way psychologically wounded soldiers will receive the treatment they deserve, and the only way to prevent thousands more from being killed and wounded in these wars, is if GIs take our lives into our own hands—to stand up and fight together against the chain of command, which has proven to be incapable of justly deciding our fate. That is what is happening at Fort Hood and throughout the military.