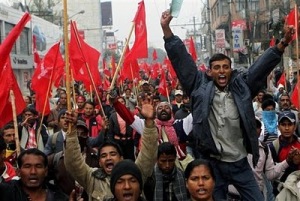 [This is an important article by Biplap, a member of the Secretariat and Political Bureau of the UCPN(Maoist), and is most likely a disguised polemic against rightist forces in the party.  He stresses the issue of  the internal and international situations for the advance of the revolution–though he underestimates the danger of an Indian economic blockade and military intervention in the event of a Maoist victory or major Maoist advances through re-establishing the People’s War.

Biplap also discusses the key role of the reactionary, ex-royalist Nepal Army.  However he puts forth two different positions on the army.  First, he writes that “we will have to fight with army if we want to complete revolution” and speaks of the need to foster splits in the army. On the other hand, he writes that the army is a nationalist force and  that a “front between Maoist and Nepal Army is possible for national independence”–a position which leads away from the necessity to re-estabish the People’s War in order to complete the new democratic revolution.–ed.]

Can We Go Ahead?

The debate in Nepal is on whether revolution is possible or not. The debate is not only ideological and general assumption; rather, it is centered on the question whether there is possibility to increase intervention in the central power state or not. Two sharp analyses have emerged on the issue. They are for and against.

The analytical perspective that sees revolution as impossible:

One of the analytical perspectives is that the revolt is impossible. Yes, it seems so from that side of perspective. This analysis has emerged mainly from the side of some leftist intellectual politicians and analysts. They have given the following reasons to justify this logic.

Favorable international situation is needed for the completion of revolution. For that, there should be a crisis in the centre of capitalism and unfavorable situation should have created against them. Moreover, there should be crisis in India, America and China for the completion of revolution in a small and poor country like Nepal. Otherwise, these power centres interfere over Nepal and revolution can not succeed.

No support of India

The role of army is important for the success of revolution. In the situation of incomplete revolution and existence of strong old army that side gets victory towards which army pays support. Therefore, if army supports revolution, it gets its completion and if it does not, revolution becomes failure. In Nepal, army is in the side of Nepali Congress and UML. In this situation, we will have to fight with army if we want to complete revolution.

The politics of consensus needs

The political of consensus came on the foundation of People’s War. Th is can not be broken at once and should not be broken too. It is impossible because it makes revolution impossible. As the going on politics of consensus is broken that brings destruction and the achievements till now lose.

The second perspective is that the revolution is possible in Nepal. This analysis is run and made by the Marxist-Leninist-Maoist revolutionary intellectuals and some of the political analysts. The analysts have given the reasons to justify the possibility of revolution. Those reasons are as follows:

Th e success of PW justifies the factual reality that the internal aspect- that is people, politics, struggle, ideology and leadership- can have more important and decisive role than external aspect. The same debate has come into existence due to the prolonging peace process. But, it is a ground reality that the Nepalese revolution has reached to more successive and favorable height in comparison to the past.

Even today, the role of India, America, Europe and China is important. However, it is not decisive factor for the success and un-success of Nepalese revolution and we should not make wrong idea about it. The ideology, leadership and the struggle of Nepal are decisive in itself. Revolution is possible if Nepalese people want revolution. The situation is in favour of people, it is in favour of revolution. There is efficient leadership with correct ideology and the workers and the militant and conscious people are gathered around it. Nepal has all these things with favorable situation. Therefore, revolution is possible.

b) Nepalese People have Consolidated International Relationship:
Nepalese people have been able to make a good and harmonious relationship with revolutionary parties, organizations, institutions and idividuals along with the most of oppressed people of the world. This consolidated international relationship denies the logic which says that the revolution in Nepal is impossible.

Some people have wrong ideas due to the relationship of Indian ruling class with Nepalese bourgeois and the coalition of the puppet government on its base. The Nepalese political movement and struggle is far more above than the reach and intervention of foreign powers.

Likewise, the situation of the nation is not so favourable for the foreign powers, which can not neglect the aspiration and the opinion of the people in a direct way. Rather, majority of the Indian people, liberalists along with the revolutionaries have a good relationship with Maoist of Nepal because they have true understanding about the opinion of the Nepalese people.

Therefore, we can come to the conclusion that the revolution of Nepal can not be aff ected by the external intervention; rather, it may be accomplish with its own specialties.

c) UCPN-Maoist has its political leadership in the country:
The success or the failure of any revolution depends on the correlation between political policy and its leadership. Nepal is only nation, in the contemporary world, where there is political leadership of the revolutionaries and the entire nation is in the hands of the proletarian class. The leadership of the revolutionaries is not only from the point of view of number; rather, it is because of political, ideological agendas. Constituent Assembly (CA), people’s new constitution, federalism, land-reform, special rights, national independence and new national army are the agendas and the conceptions put developed and fore warded by UCPN Maoist. Nepalese people have their active participation and a strong support on them. The intellectuals, traders and businessmen and even the security forces have their support on it.

Lobbies of UML and NC along with the small parties in the nation have their support to the agendas of Maoist party. This shows the possibility of people’s revolt.

d) Front between Maoist and Nepal Army is possible for national Independence:
In general interpretation, it is said that Nepal army is in favor of NC and UML, the parliamentary parties. However, this assumption is not true even in the complexity of the contemporary politics and it should not be. Nepal is in the multifaceted situation.

The complex situation created in Nepal is due to the oppressive, hegemonic and interference tendency of the Delhi and the capitalist and puppet tendency of the parliamentary parties like UML and NC. Nepalese people are very sensitive, conscious and cautious about the problem of national capitulationism and national independence.

The parliamentary parties are in a particular mission to be owner of the Nepalese people by making agreement with Delhi by handing over all the natural resources of the nation to it. Th is has been clearly understood by the Nepal army. If we analyze it objectively, the nation sense of the support of Nepal army towards NC and UML is wrong. In the period under the direct reign of king, army was with king.

But after the election of Constituent Assembly (CA) and declaration on of republic of Nepal, army has supported the parties. The condition for Nepal army not to support the king, when it was declared to be abolished through the meeting of CA, was peace and change.However, the condition or objectives for peace and change have not been achieved yet even after the abandonment of the king.NC and UML are hatching conspiracy to push the country into conflict. Nepal army and all the other patriotic forces clearly know about it. Th is shows possibility to form a united front between the Army and Maoist.

e) Assistance and Participation of big population:
Assistance and participation of the people is one of the important conditions for the completion of revolution of any country. In Nepal the majority of the population is with UCPN-Maoist and not with parliamentary parties. Maoist has its 4 million voters. The quantity of vote keeps influence over one and a half crore people out of 2 and a half crore of total population. It is the majority of the population. If we involve patriots, progressive and true republican forces together, the revolution is possible.

f) Efficient & Capable Revolutionary Party:
The first and foremost condition for the fulfillment of the revolution is consolidated and capable revolutionary party. And, UCPN-Maoist is its representative. Th e party has hundred thousands of trained cadres who have faced many problems and suffering. The chain of leadership is form the local level to the decision making central level. Th e number will be increased along with the creation of favourable environment of revolution.

g). People’s Liberation Army and Youth:
Military force is other important factor for People’s Revolution. Any of the people’s revolution is not success without the army of the people. Nepalese people have this efficiency available with them at this time. People have 19,000 registered PLA in the cantonments and hundred thousands trained YCL with them. This force can be used for the liberation of people, prosperity of the nation and national independency.

If we study the debate- ‘is revolution possible or not in Nepal’- seriously, we come to the conclusion that these debate are not un-objective, false and untruth. Rather, they are true, objective and natural in some extent. The analysis that accepts the impossibility of revolution is also true from that perspective. Along with it, the logics and the analytical expression from the side that accepts the possibility of the revolution is truer from that point of view. However, we should and must be aware that which one is more objective and truthful. We should find out the truth which one is more possible and correct.

The logic and the perspective that sees revolution impossible is obviously weaker, confined and shortsighted. This type of analysis has become unable to include the entire area of Nepalese politics and its objective, subjective, ideological and the practical aspects along with its possibility. This type of analysis only can see the middle class, foreign ruling class, some handful anti people intellectuals and the diplomats. It can not submit the contradictions, the subjective forces of the revolutionary people. Therefore, it has a possibility to leave the strong aspects of the revolution by putting the weaker aspects ahead.