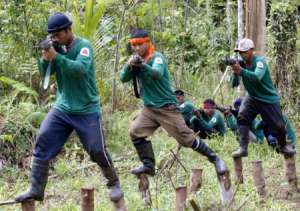 Fascist deception really knows no bounds. This matter of fact is once again proven in the latest spin about NPA casualties the 10th Infantry Division-AFP (10th ID-AFP) and the Philippine National Police Regional Office XI (PRO XI) have fed the media in a concerted attempt to conceal their mounting losses and failure to contain the revolutionary armed struggle.

To set the record straight and provide an accurate accounting, there was no casualty on the NPA side during the June 18 tactical offensive.

Ten minutes into the fight, the first enemy reinforcement from poblacion Cateel arrived in an attempt to extricate the beleaguered PNP patrol base. After 30 minutes of fierce exchange, the NPA striking force shifted to plan B as real-time reports from the ANAC-NPA’s advanced reconnaissance started pouring in warning about the large contingent of enemy troops from the Baganga 1105th PMG-PNP headquarters approaching the encounter site.

The NPA command decided to disengage, and made prompt preparations to confront the enemy’s main column. The blocking force of the ANAC-NPA set up an ambush and hit the second reinforcement coming from Baganga. The series of encounters resulted to three members of the 1105th PMG-PNP killed and five wounded.

The masses in Cateel are celebrating the latest tactical offensive by the Red Army that served as punitive action against the abusive members of the reactionary police stationed in Dao.

Numerous complaints brought by the masses to the NPA’s attention on the 1105th PMG’s abuses prompted the ANAC-NPA to mount the punitive action against the abusive PNP unit. Elements of the 1105th PMG-PNP posted in Dao have made a lucrative livelihood out of their extortion operation targeting hapless motorists. These 1105th uniformed highwaymen impose a standard P1,500 SOP fee on commercial and logging trucks who invariably pass by the strategically positioned base while illegal drugs and petty theft proliferate. It has become a long-running joke by the people that these bloated goons in uniform are so adept at lifting bottles of beer yet never lift their fingers against the criminality victimizing so many people.

When Cateel town was decked all over with banners congratulating the Red Army on its 40th anniversary, 1105th PMG-PNP hooligans accosted motorists and ordered them to do push-ups as punishment for the festive atmosphere. Residents in Brgy Poblacion have lobbied many times for the dismantling of this outpost.

The 1105th PMG-PNP has also been indicted to have conspired with the 67th IB-AFP and the 10th ID’s Military Intelligence Battalion in the political killing of peasant activist Ludenio ‘Dos’ Monson in Boston town last year. Monson, an indigenous Mandaya was a staunch critic of the abuses of the 1105th PMG-PNP and one of the complainants of a number of cases filed against the unit at the reactionary Commission on Human Rights.

Following the Friday NPA punitive action, the 1105th PMG-PNP went on a rampage and vented their ire on civilians. Four civilians were man-handled, including one youth who is still in pain after the severe beating. They have been conducting arbitrary searches on houses and interrogating civilians they suspect as supporters of the NPA.

The NPA once again makes it clear that abusive elements of the reactionary armed and police forces will be punished for their crimes against the people.