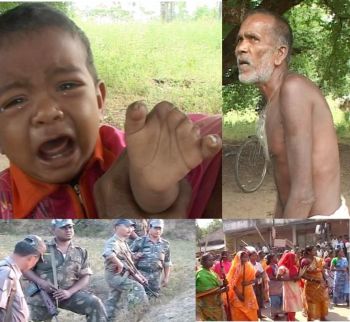 When the State Declares War on the People

A 15 minute Trailer on the Human Rights Violations in Chhattisgarh resulting from Operation Green Hunt.

We have been hearing many stories about the human rights violations before and after Operation Green Hunt was announced. Allegations and counter-allegations have been going around. Fact-finding investigations have uncovered the atrocities security forces are committing in these areas, but now those very findings are being questioned.

At such a time it is crucial to present the reality and tear the veils obscuring the truth. When the State Declares War on the People is a 15-minute trailer by Gopal Menon based on his recent coverage of the ground reality in Chhattisgarh. This short film contains exclusive interviews with victims and their testimony including 1 1/2 year old Suresh who had three fingers chopped off his left hand, an old man who was electrocuted and whose flesh was ripped off with knives, women raped by Special Police Officers and CRPF.

The film also presents the views of Arundhati Roy and Mahesh Bhatt, two eminent citizens who have been closely following developments in Chhattisgarh. The clear intention of the State – to wipe out all resistance through terror in the name of fighting the Maoists – is demonstrated in this film.

Gopal Menon is an activist-filmmaker focusing on caste, communalism and nationality. He was arrested twice while trying to go to Lalgarh and beaten with rifle butts and lathis. He was detained in Dantewada too. This is a trailer of a larger film on the Indian State’s war on the people.

Some of Menon’s earlier films are Naga Story: The Other Side of Silence, Hey Ram!! Genocide in the Land of Gandhi,PAPA 2 (about disappearances in Kashmir) and Resilient Rhythms (a rainbow overview of the Dalit situation) amongst others.

The trailer for this film is available on YouTube in two parts:

Below is a report on a screening of the film at the Press Club of India in Delhi.

New Delhi: In a decrepit hall at the Press Club of India, a handful of people watched glimpses of Gopal Menon’s film, When the State Declares War on the People. The 10-minute preview, which began with the tale of a child whose fingers were chopped off, spoke of the atrocities committed by security forces in the Maoist war zone.

The screening is part of a campaign to drum up support against Operation Green Hunt. The short preview of the film was followed by an interaction with the media, where Menon was joined by Gandhian activist Himanshu Kumar.

Kumar, director of Vanvasi Chetna Ashram in Chhatisgarh, said, “If anyone stays in Bastar and Dantewada for a few hours, you can hear several tales of horror from everywhere.”  Describing himself as “a commentator you don’t want to listen to when you’re losing the match”, Kumar was critical of the attitude of the state towards dissenting voices. “People taking up these issues are being labelled anti-national or Naxal sympathisers,” he said.

Menon, who was content to let his film do the talking, added, “Incidents of violence by the state are not getting the same attention as incidents of Maoist brutality.”

Kumar said dialogue was essential between the state and its people. “Forget the Maoists, talk to your own people. Maoism is a local problem with local solutions,” he said.  On why the Maoists had not come to the table despite the offer of talks by the Home Minister, Kumar said the killings needed to come to an end for any meaningful discussion to take place.

Kumar, who will be meeting P Chidambaram, said, “The Home Minister cannot repeat the statement that law and order is a state subject. With gross human rights violations escalating the conflict, sincere efforts from the Centre are required.”  Deeply engaged as a grassroots activist, Kumar stayed clear from any dogmatic positions, but simply stated, “Operation Green Hunt is leading to that stage — the point of no return.”